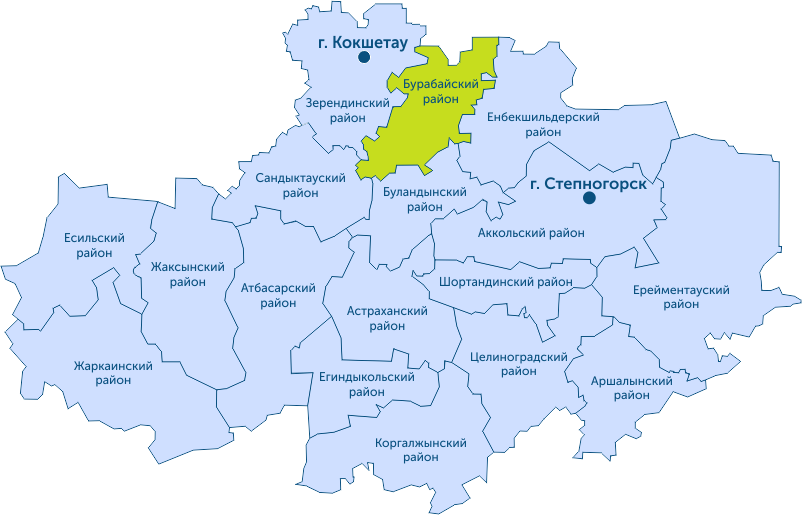 Aqmola region was founded in 1939. The territory is 146.2 thousand square km.

The regional center is Kokshetau.

There are many nature reserves in the region, such as Korgaldzhyn National Park, Ereymentau, Atbasar, Burabay and Zerenda, where hunters place and adapt various species of animals and birds to the climate.

Korgalzhyn lakes are rich for the variety of fish, including commercial species, such as gold and silver carp, ide, pike, tench, perch and roach.

Tengiz lake is one of the largest lakes in the reserve, with a total area of 1.590 square meters. km, the length of the coastline is 488 km. This place is unique, here pink flamingos have found their shelter on the islets of the ancient lake.

From time to time, forest dwellers of Northern Kazakhstan and Western Siberia, such as lynx, roe deer and moose wander into the protected area.

In the north of the Aqmola region is the National Park “Burabay”. This recreational pearl of Kazakhstan is located in a fantastic mountainous area filled with mystical wonders. Magnificent pine forests, huge rocks, fantastic in shape peaks sometimes resembling the Egyptian pyramids are separated by quiet lakes.

Mountain wealth Burabay surroundings opens up unexpected secrets. Among them is the picturesque rock Okzhetpes (translated as “inaccessible to the arrow”), whose top resembles an elephant, and the bay, where the rock of Jumbaktas is located (in the translation “Stone-Mystery”), resembles a mysterious Sphinx with a manly figure.

Borovoe lake is one of the most beautiful places, the pride of the region. Throughout the shores of the lake are many recreational and tourist facilities, providing all the conditions for leisure time: restaurants, beaches, shops and disco bars. Through narrow mountain passes anyone can find the road from the Borovoe lake to big Chebachye lake. Relief of the territory is various: the most part is occupied with steppes, small hilliness, flat weak divided and river valleys, the mountains are covered with woods.

Climate of the region is sharply continental. Summer is short, warm; winter is long-lasting, frosty, with strong winds and with, blizzards. The minimum temperature of air makes – 40°С and maximum reaches +44° C. The vegetation is presented by steppe kinds of grass and according to landscapes, especially in northern part of area, pine-birch woods, motley grass vegetation, which covers slopes of mountains. Mountain pine woods is the riches of area.

The region’s fauna differs by considerable riches and variety: 55 kinds of mammals, 180 kinds of birds, 300 kinds of waterfowl, etc. There are State national natural parks as “Kokshetau” and «Burabai», Korgalzhyn National park is of the international value in the area territory.
Bowels

There are concentrated unique stocks of gold, silver, uranium, molybdenum, technical diamonds, kaolin and muscovite, and also iron ore, coal, dolomite, widespread minerals, mineral waters and a medical dirt in the area territory. Measured value of balance stocks makes not less than 20 billion US dollars, and prognostic resources are – more than on 100 billion US dollars.